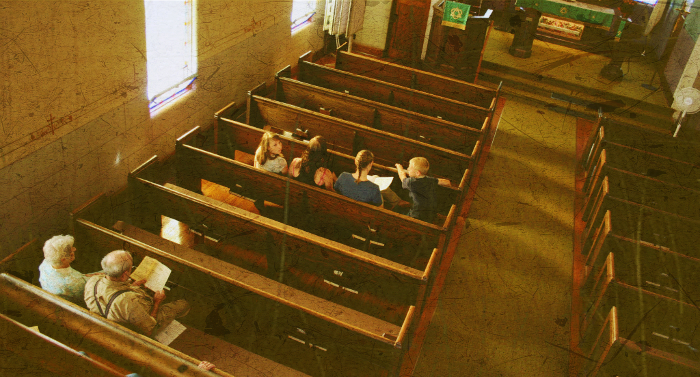 I’m sitting in church and trying to listen to the sermon. It’s raining outside; the water falls against the window like sheets on a bed someone’s making in the morning. Inside the pews are packed. A baby cries; the couple in the next seat over whispers back and forth. There’s a teenage girl in front of us, her dress matches her nail polish; her hair pulled up in a bun with hormonal precision.

And there’s my pastor. A good preacher, really. He’s finishing a series on the story of Esther.

But a spark of movement beneath the pew in front of me catches my eye. It darts around the wooden leg of the pew. Is that a spider? I can’t be sure. But it is something, something tiny; ten of them could fit on the head of a needle. The only reason I know it’s even alive-even something- is because it’s moving so fast; I see blurs and imagine eight little legs rushing like blades on a helicopter.

“While the tale of how we suffer,” James Baldwin writes, “and how we are delighted, and how we may triumph is never new, it always must be heard.” I read this in the memoir of a man who overdosed on heroin, and thought of it on hearing Esther’s story. Baldwin adds: “There isn’t any other tale to tell, it’s the only light we’ve got in all this darkness.”

No one has ever heard silence. No one except God in the beginning. But then he spoke and something happened, existence happened, noise happened, we happened. And all these happeneds, all the stuff of legends, religion, wars, romance and life itself, they all find their way into one word: stories. Heavens and the earth, an apple, snake, and the only permissible naked pictures in Sunday school; Israelites, a temple-tabernacle-whatchamacallit, slaughtered animals, a baby in a manger, a cross and a tomb. And now this sermon, this room, men dressed in suits, teenagers slouching and texting out of sight; a spider dashing between the pew.

What are any of these without words? Consider the following counter to Mr. Baldwin: “a light shines in the darkness.”

Plato once commiserated that when people started writing they began forgetting. A startling observation. Stories have always existed. But our means of conveying them -blogs, pop-up books, foreclosure notices and song lyrics scrawled on diner napkins- the words we use to pin these stories on paper were once just as novel as the microwave or internet. And they were, to Plato, as ridiculous a means of existence as Facebook to my grandparents.

The spidersomething darts back under the pew. Is it a spider? A tiny bug? A delusion? I am learning something just by asking the question. It disappears again, around the time of my pastor’s fourth point (it’s a Presbyterian church).

That’s the remarkable thing about stories, the way they dart to and fro, like tiny somethings beneath a Sunday pew. They never stop but sometimes disappear. They are part of our world and then they are gone, almost as soon as we hear them. And with stories that our minds wander, weaving the the tapestry of time. Until the story leads us from our need for a verdict; “only those who believe obey,” Bonhoeffer wrote, “and only those who obey believe.”

The story of Jesus is not that of a masochistic bloke who just happened to be God. It’s the story of a God who entered the story because he’s fascinated with the narrative and- befuddlingly so- the characters themselves. That takes a kind of desire that words- regardless of how inspired, conveyed, or regarded- cannot capture.

We’ve forgotten how to tell this story; we took the apple, wrote it down; we’re distracted in the pew and forgetful too. These stories we tell are nothing more than reality roped and noosed onto a few stubborn, fallible words. They are not the end of the matter; you do not train a stallion by getting a rope around its neck and hanging on for dear life. We are not God. We’ve no ability to hear them not told.

So we press on, we live on, we search on, and we move on.

And someday maybe we’ll remember; we’ll hear the reality behind the words. We’ll see the spider, confess our belief, and these stories we tell will become quaint recollections of when we didn’t know better.

And oh, the stories we’ll tell.

“A day at a time is long enough to sustain one’s faith; the next day will have its own cares.”