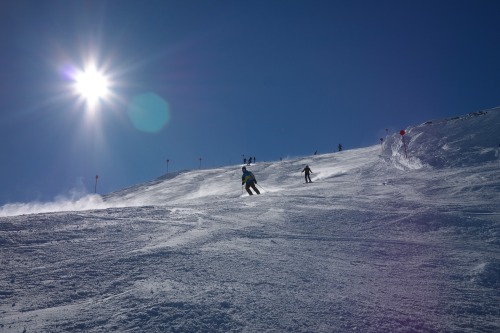 “…but in the law of the Lord is his delight.”

My parents taught me to ski when I was nine years old. This took place in Indiana. That is not a typo.

Skiing in Indiana is a unique experience. While it is still possible to seriously injure oneself (trees grow in Indiana as well as in Maine) it is also entirely possible to feign mastery with very little true capability. Skiing-as far as this havoc-wrecking, little Hoosier was concerned- required little other than pointing my skis downhill and possessing enough body mass for gravity to do its work. Beyond that, little control or turning was required.

I’ve been thinking for some time about the phrase in the first Psalm: “delight in the law of the Lord.” What a strange notion; have I ever delighted in any law?

The poem seems so polarized that the metaphors alienate me; I don’t walk in the way of the wicked (I’m not a Dallas Cowboys fan) and I don’t sit- at least intentionally- in the ‘seat of mockers’ (I will never partake in a presidential debate). But am I part of those who ‘flourish’ like trees by the river? I don’t think I meditate on the law of the Lord, certainly not day and night.

And all this creates a tension: the Christian life is supposed to be ‘free’ (the truth will set you free John 8:32). But then Paul goes and calls us slaves to Christ (you are now a slave of Christ 1 Corinthians 7:22). How can both of these be true?

When I was six years old, I taught my brother to play football. He was four and liked to cheat. Specifically, he enjoyed snapping the ball, turning and sprinting to his own end zone. “Touchdown!” he’d yell. To which I would protest: “It’s only fun if you play by the rules!” He disagreed. Provoking one’s older brother is a blast.

Which brings me back to skiing. Despite many days spent barreling down hills in Indiana, I have become a halfway decent skier. Enough to know, at least, that there are few feelings, few euphoric experiences, that can even begin to compare with a beautifully-executed parallel turn in fresh powder. Knowing what I know now, I’ve no desire resort to my original means of navigating a slope (namely hands on knees and screams of “MAYDAY!”).

The law of gravity and the law of friction dictate the laws of skiing: when I point my skis downhill, I will go; when I turn my skis perpendicular to the hill, I will stop. Apart from these rules, apart from this law, there is just mad, tumbling chaos.

The Christian faith- faith based on an eschatological hope in the life, work, death and resurrection of Jesus Christ- is hinged on belief into which Christians step freely. Sure, we can break the rules and go our own way. But bombastic plummets are a death wish on any slope higher than a Midwestern trash mound. (To be fair, the place where I learned to ski was natural. I think.) And it’s really not that fun. Pointing the skis straight downhill and holding on for dear life is actually gets a little boring.

This makes me think of C.S. Lewis: “No natural feelings are high or low, holy or unholy, in themselves. They are all holy when God’s hand is in the rein. They all go bad when they set up their own…”

I must remain within the framework of faith- the parameters of Christian hope- if I am to experience the resurrection of Christ as a daily, tangible reality. I can be creative; I can take it faster or slower; every skier has personal preferences and techniques. Theology, after all, is highly nuanced. But there are basic principles that must be followed in order for the thing I’m doing to classify as ‘skiing.’

The words of another commentator ring true in my mind: “Life is lived in futility if its fundamental purpose is never discovered.” It is hard to comprehend, but life is better with confines, with what Hebrew poets would have known as “the law.”

Faith requires submission but allows for true freedom. It opens us to the freedom of the mountains (or…hills), the freedom of fearlessness, of life lived within the knowledge that death has been conquered and all is being redeemed.

Following the law makes something that would otherwise be impossible, possible. It makes skiing possible. It makes teaching your four-year-old brother how to play football (so you can beat him at it) possible. It’s what makes Christianity so life-changing, so liberating.

Of course, this analogy is flawed and the correlation breaks down on multiple levels. But being a skier provides me the belief that there are some laws in which I might delight, that the very idea is even possible.

Even, I dare say, in Indiana.