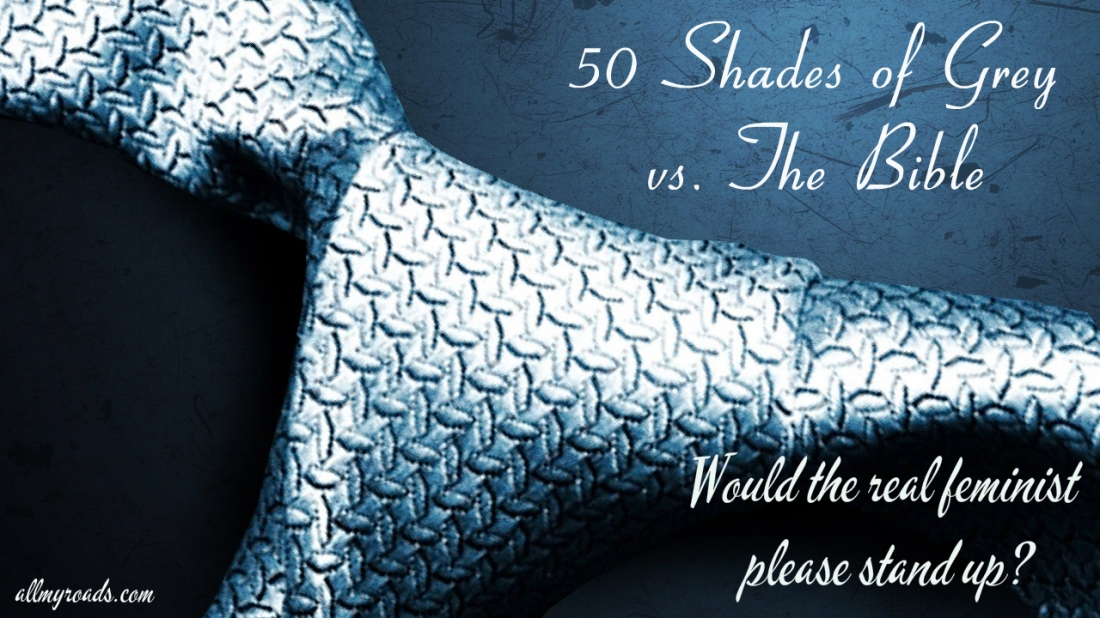 Saturday is Valentine’s Day. And this year, Valentine’s Day is going to prompt our star-eyed saint to turn over in his grave. Because this weekend the long awaited 50 Shades of Grey– based on a best-selling novel by E.L. James-will be released. It’s Hollywood’s version of farting bubbles during a baptism. As amusing as that sounds, rest assured, I will not be seeing the movie.

there’s a line in the sand.

It is possible that my position might be confusing. Because there are many feminists who are praising this movie, such as one HuffPost commentor on the books and subsequent movie that said:

“I am a feminist through and through and…I have read and re-read these books and still get lost in this beautifully written love story.”

So obviously one of us is wrong, right? If I think 50 Shades is an atrocious and despicable attack on women and then others say it’s a beautiful love story, one of us has to be a little off-kilter…right?

So let’s start by examining my basis for feminism. It comes from the Bible.

No, but since you asked, why don’t we put our views on trial, shall we?

Why don’t we put both of these documents, the Bible and 50 Shades of Grey, to the litmus test of feminism and see which holds more water. Whaddya say?

According to Merriam-Webster, Feminism is:

“…the belief that men and women should have equal rights and opportunities.”

But, if we want to go straight to the source, then we can pull a definition of feminism from an essay by two prominent feminists, Jennifer Baumgarnder and Amy Richards, titled: Manifesta: Young Women, Feminism, and the Future. In this essay, Richards and Baumgardner base their definition of feminism off an interview of an Australian lobbyist who stated:

“[Feminists are] just women who don’t want to be treated like shit.“

Well that really clears the waters, now don’t it? Let us now exam The Bible and EL James’ novel and see which does a better job of promoting the pre-described cause feminism.

50 Shades of Grey centers on the character of Anastasia Steele, a pretty and innocent woman who falls under the allure of a powerful entrepreneur Christian Grey. Allow me to save you hours of terrible dialogue and plotless page-turning: essentially, Mr. Grey is controlling to a psychotic degree. And, over a long period of emotional manipulation, he eventually submits Anastasia to a contract, whence she agrees to engage in a sexual relationship void of romantic entanglements. The sexual relations goes well beyond “conventional” sexuality, however, and involves sexual techniques that clinically considered to be masochistic and/or abusive. As Anastasia gets deeper into the relationship, she finds herself more entangled in a web of Grey’s manipulation and the plot becomes all the more sickening and the sexuality even more disconcerting.

Says the main character at one point, anticipating her next encounter with Grey:

“…butterflies flood my belly, as well as a darker, carnal, captivating ache as I try to imagine what he will do to me.”

That sounds like the words from a PTSD counseling session, not someone reminiscing on a romantic encounter.

How about this quote from Christian Grey to Anastasia:

“I’d never beat you black and blue. I aim for pink.”

Oh, well thanks Mr. Grey. To me, that sounds like the words of a wife-beater. But I understand there’s different sexual tastes. In which case, Monsieur Grey, I’d like to say that you’re actually a very decent man and you obviously really care about women and their rights. Have you thought about writing for Hallmark?

Still: if a woman wants a certain type of relationship, then she should be free to enter into it. But the fact is, 50 Shades does not depict Anastasia as anything other than a pawn in a man’s game. Christian buys the company she works at so he can control her work environment; when pictures of Anastasia are on display at a gallery, he buys all of them so no one else can see her. The book does not glorify a woman who is empowered and respected, it depicts and edifies the male domination of a woman who, according to one feminist reviewer, “has absolutely no sense of self worth.”

The point being, this book is about anything but a healthy sexual relationship between a man and a woman. Instead is about manipulation, control, deceit, sexual contriving, emotional man-handling, and downright misogyny.

If being beaten, abused and brain-washed doesn’t qualify as “being treated like shit” then I’m not sure what does. If emotional manipulation to the ends of masculine gratification isn’t the exact opposite of feminism, then I don’t know what is. If romanticism being supplanted with narcissistic sentiments that prompt a gut reaction of “dah fuh?” doesn’t make us at least a little bit angry, I don’t know what will.

Point being, 50 Shades of Grey flunks the litmus test for feminism.

Now let’s turn to the Bible.

First, we land on Deuteronomy 22:28-29 which states that if a man has sexual relations with a virgin (the implication being it is forced, thus rape), he has to marry her and pay the dowry. Some people, such as this author, say this was more out of concern for the economic status of men than women’s welfare. But the reality is this verse is extracted from a document of laws written in a culture in which men had complete control. A woman who had been raped outside of marriage would not be eligible for marriage to another man, and thus would be subjected to complete and utter poverty; she would likely have been cast out of her own household. The Biblical command that the perpetrator pay a dowry was to ensure that she not be subjected to utter poverty for the rest of her life, but that the man who violated her dignity and respect be made to repent and care for her.

Moving on, Jesus was hated by people for many things, among them his association with and compassion towards women who were outcasts in the society of the day (Mark 5:21-34 being one such example). He even vouched for women who the religious leaders of the time wanted to kill for adultery (John 8:1-11). In fact, he kinda, sorta, totally saved her life when on one else was willing to stand up for her.

Then we have the example of the early church. Early Christians (many of whom wrote the New Testament) were a threat to the Roman Empire because of many things, one of which being the fact that they valued singleness; women didn’t have to be married to participate, live and thrive in their communities. This led to a breakdown in family structure and a lack of trust placed in the empire and worldly security. Instead, trust was placed in Christ. They were counter-cultural in their love and acceptance of single women and the way they treated them not as merely objects or wives but as valuable participants in the kingdom of Heaven.

But then there’s Paul.

A common objection to the Biblical stance on women is that Paul tells women to submit to their husbands (Colossians 3:18) and this subjects women to abuse, rape, subjugation etc, etc. But such a statement is very ignorant of the very next words Paul writes:

“Husbands, love your wives and do not be harsh with them.”

And then there’s the time when Paul told women to be silent in church (1 Corinthians 14:34-35). Again, context would beg us to understand that Paul was writing this pertaining to a specific situation when a group of women were literally disrupting the service; he never intended it as a blanket statement upon all women.

I could go on this for a long time. I could talk about the poetic manner in which Adam praises Eve when he first sees her, the sensual beauty and feministic eroticism of Song of Solomon or the strongly feministic language of bride and groom that is interwoven throughout the entire Biblical narrative. I could point to numerous women who’s leadership and womanhood are praised throughout Scripture, not the least of which would be the women who discovered the empty tomb on Easter morning. They are presented not only as stronger and more brave than the male disciples (who, come Sunday morning, were hiding in a locked room). But also as the primary recipients of the good news, the first believers in the Risen Lord.

I could go on. But here’s the point: the Bible edifies, exalts, and glorifies women as valuable, wonderful and equal co-partners with men in society. At the very least, the Bible certainly dictates that women not be treated like shit.

50 Shades of Grey on the other hand.

If you care about women being treated as more than objects, if you care about their rights, their personhood, their wants, their desires and their perceptions in society, then do not go see this movie. Don’t support something that is so subjugating. Don’t be part of a movement that supports:

“the idea of someone who is older, richer and more powerful, and who forcefully and painfully exerts his physical dominance, has become the totemic sexual fantasy for women in 2014.”

I encourage you to read the links I attached to this post and form your own opinions, as well as this very helpful article. Maybe you don’t agree with my take on the Bible and that’s fine, but hopefully you agree that women are human beings, and I’d love to discuss how the Bible supports and truly illustrates that viewpoint.

But please: do not support a view of women that is downright objectifying and demoralizing. Show yourself to be above that.

Black out 50 Shades of Grey.

5 thoughts on “50 Shades Of Grey Vs. The Bible: Would The Real Feminist Please Stand Up?”