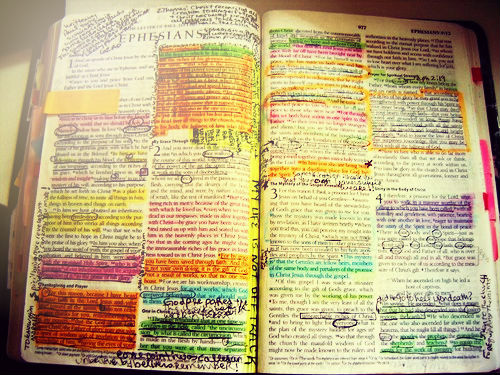 I stumbled upon the Bible of my high school days this afternoon and took a moment to examine it. The copy is ominously thick and self-indulgent, worn down from angst filled examination of my high school doubts. I dropped it upon my desk with a self-righteous thud.

Opening its pages, I had the sense that many a highlighter met their fate on these words and I was intrigued to notice that even some obscure passages among the Minor Prophets were colored with great enthusiasm, leading me to question what I knew then that I don’t now. Moving further along, I noticed that the pages weren’t just elaborately highlighted. No, no, no apparently that wouldn’t have sufficed. Rather it appeared as though my twelve-year-old self also had the spiritual gift of making radically obvious comments in the margins. Next to the opening to one of Paul’s letters I’d eloquently penned “this is Paul’s introduction and greeting”. Ah, thank you for the insight, Luther.

After doing this, I pulled out my current Bible: a modest, non-intrusive, all-together decent, leather-bound version that’s just small enough to be mistaken for a Steinbeck novel. I opened the cover and found the pages in stark contrast to those of my youth. Very few words were bolded in yellow, and even fewer comments were scratched into the margin. The pages were worn and the cover understandably flimsy, but otherwise there was little to suggest this book was nearly as used as its predecessor, despite my owning it for the past five years. Countless hours had been spent reading these pages to which sermons, papers, notes and reading reports could all attest. But the pages themselves had been overlooked en route to a grander objective.

I have several good friends who are excellent photographers. One of them visited me a year or so ago, and I took him to a lighthouse near my home. As we were walking down a gravel path on the way, he stopped to take pictures of everything from a pebble, to a pinecone to- I kid you not- the garbage can. At the time it struck me as somewhat ridiculous and annoying; I was trying to show him picturesque scenery and he was snapping pictures of a garbage receptacle like paparazzi on a celebrity.  We arrived at the lighthouse and I was proud to hear him confirm how beautiful it was. He took a couple pictures of it but then returned to focusing on rocks and a bit of seaweed. The fact that he’d taken less pictures of the lighthouse than the trash can sat in my mind at the corner of befuddlement and agitation.

Later that evening, after I’d forgotten about the whole thing, he showed me some of the photos from the day. The ones he had taken of the lighthouse were wonderful, but another caught my eye.

“Oh,” he replied, “That’s the trash can near the lighthouse.”

I looked at it.

This didn’t faze him for a moment. “Yea…see… I noticed as we were walking by how the sun shined on this angle here, and with the right focus I was able to capture the light reflecting off it in that direction, which makes the reflection of the trees on the metal really apparent. Pretty cool stuff.”

The world is wonderful and waiting to be seen. Children seem to get this, and attack the challenge of the unknown with curiosity and highlighters, taking in each new wonder as the greatest they’ve ever found. I’m not sure if it’s a driver’s license, college diploma or the belief that I always have “important things” to do, but I’ve lost this wonder. Instead of zest and great adventure, I am surrounded by unacknowledged miracles; trash cans are just trash cans and even the most remarkable things in life soon fade into a complacent familiarity.

But from a Biblical text to corners of a trash can, miracles exist everywhere for me to highlight, photograph or simply observe. They quietly demand to be noticed, not for their own sake, but for ours because the small wonders in life must ignite our souls if we have any hope of comprehending the large ones. If we don’t take the time to try to comprehend the mystery in a garbage can or tiny portion of Scripture, rest assured that the grandest of miracles like lighthouses and redemption could never be in our grasp.

Only when I understand this will I truly realize that the kingdom of heaven never belonged to the lawgivers, scribes or teachers and it never will.

Rather, it has always been gifted to the enthralled, the meek and curious. It’s always belonged to the highlighting, wonder-filled and captivated children staring at a miraculous trash can by the side of a gravel path.